Gollum is cooking tomato sauce and Elon Musk is playing the trumpet in a jazz club: the surreal images that the KI DALL-E mini generates from simple sentences are going viral. But in addition to all the fun, the limits of the software reveal a basic social problem.

A dachshund (finally) invents the perpetual motion machine, Elon Musk plays the trumpet, a sausage opens a supermarket: no matter how absurd the idea – the AI ​​graphics generator DALL-E mini turns it into a picture.

The tile-like pictures are going viral on social media, everyone wants to try the DALL-E mini. What’s behind it? How does it all work? And: What is that supposed to mean? It quickly becomes clear: the software is not just an example of the possibilities of machine learning and is a lot of (Dada) fun. Rather, it shows a social problem and the limits of artificial intelligence, which the programmers even point out themselves. But more on that later.

How does DALL-E mini work?

The principle: users enter any text in a search field on the free platform. DALL-E mini interprets the sentence and then, after a bit of calculation (which can sometimes take up to a minute), creates nine graphics that more or less match it. To do this, the program accesses all available images on the Internet and uses them to create its own image. To train the AI, it was fed millions of images from the web and their respective captions. In this way, the program gradually learns how images and fragments of them are to be interpreted linguistically or how which word can be transferred to which image. 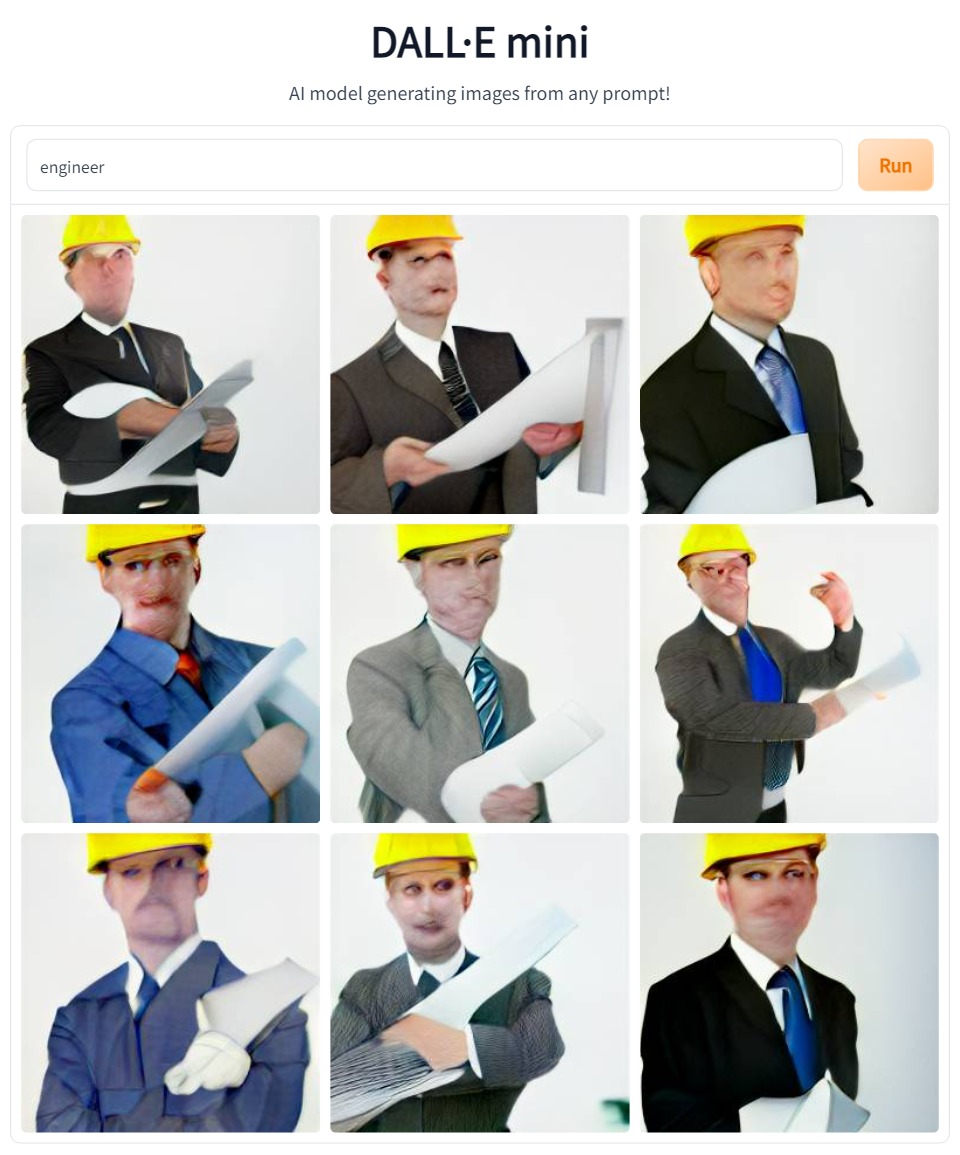 And there are the bias limits: When it comes to the word “engineer”, DALL-E mini only paints men. The software doesn’t realize that there are also female engineers – and she gets her knowledge from the Internet, where the impression that engineering is a male domain is apparently reinforced. 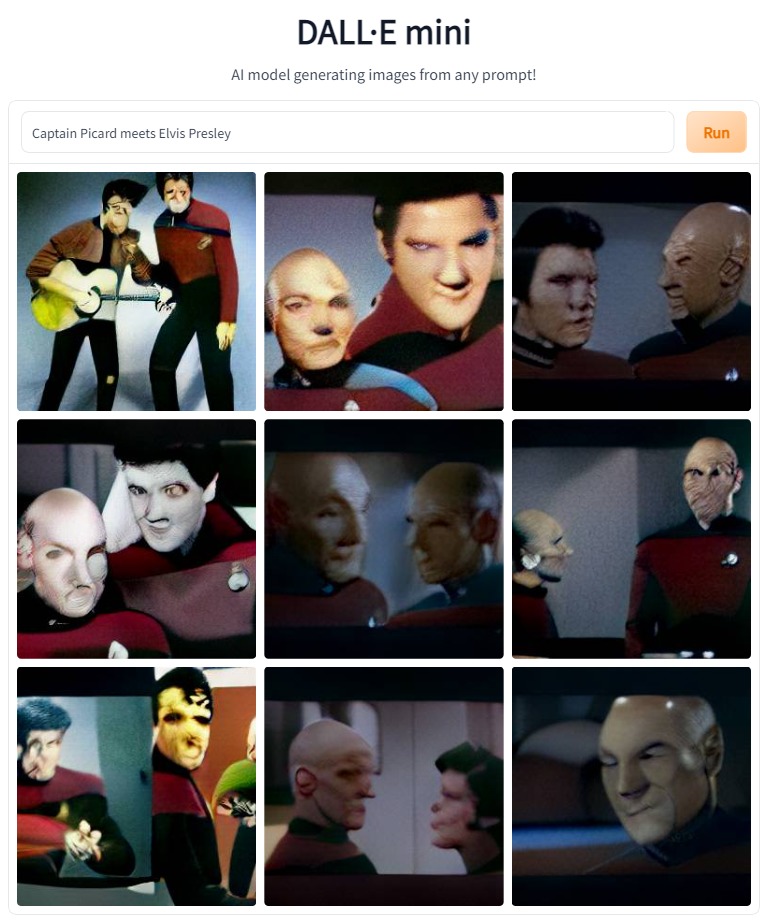 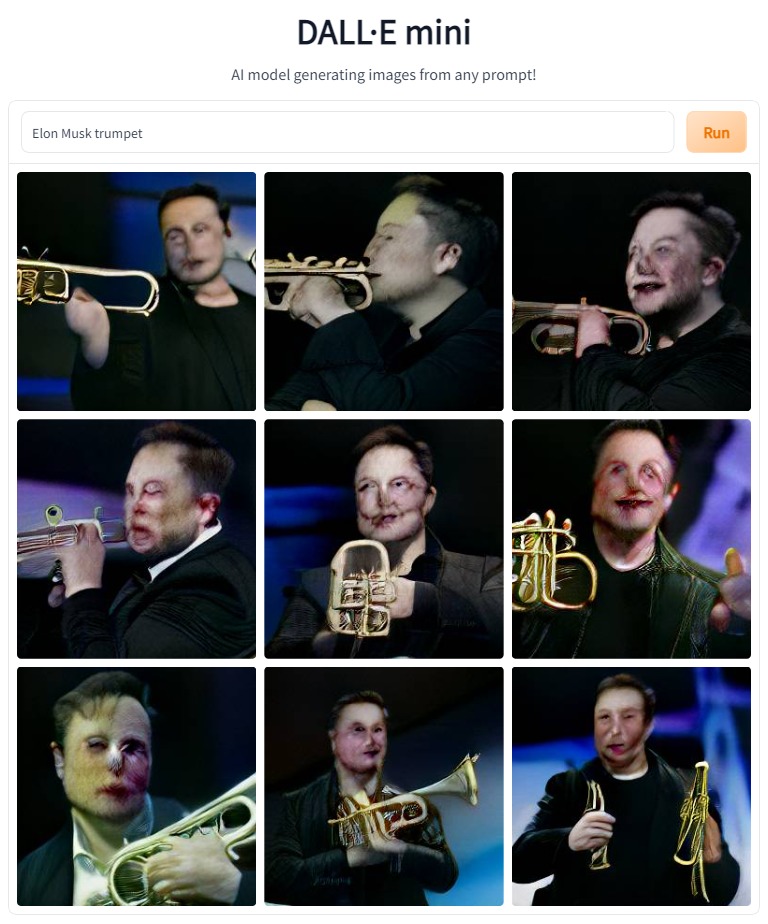 Elon Musk plays trumpet? The image is quite unproblematic for DALL-E mini, because there are plenty of image files from the Tesla boss on the net. 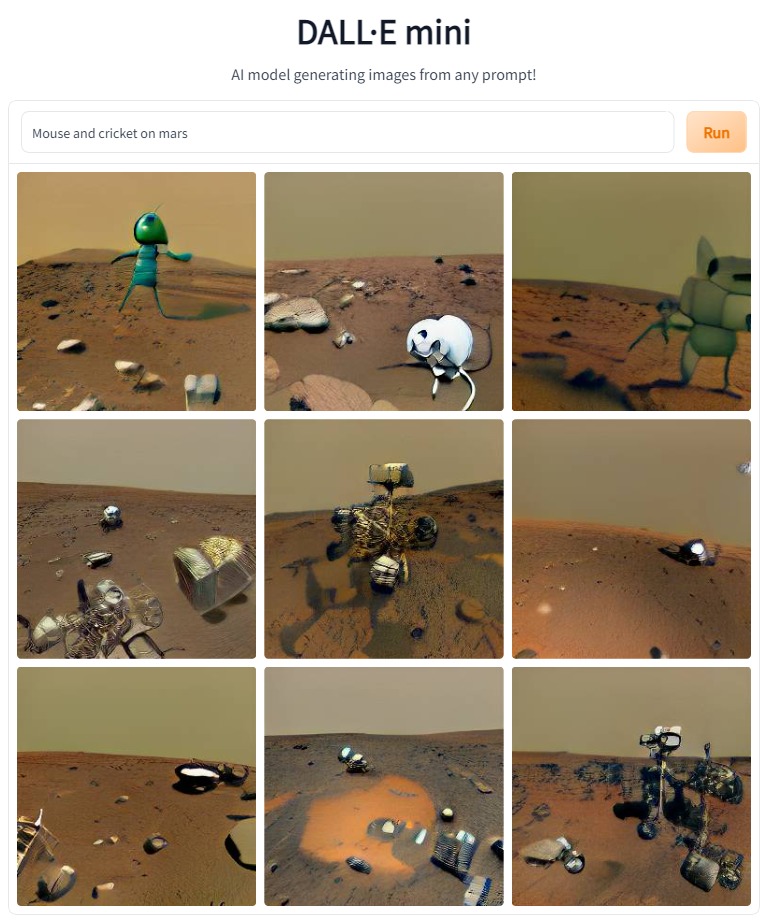 Speaking of Elon Musk: A mouse and a cricket on Mars. Interpreted somewhat idiosyncratically. 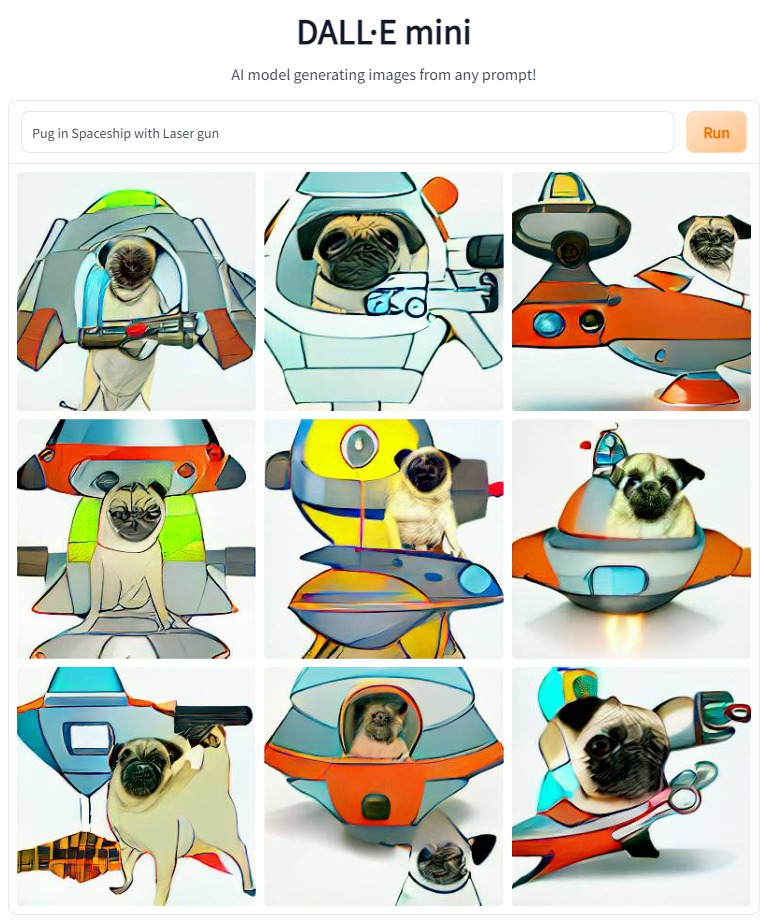 A pug in the spaceship. Why not? 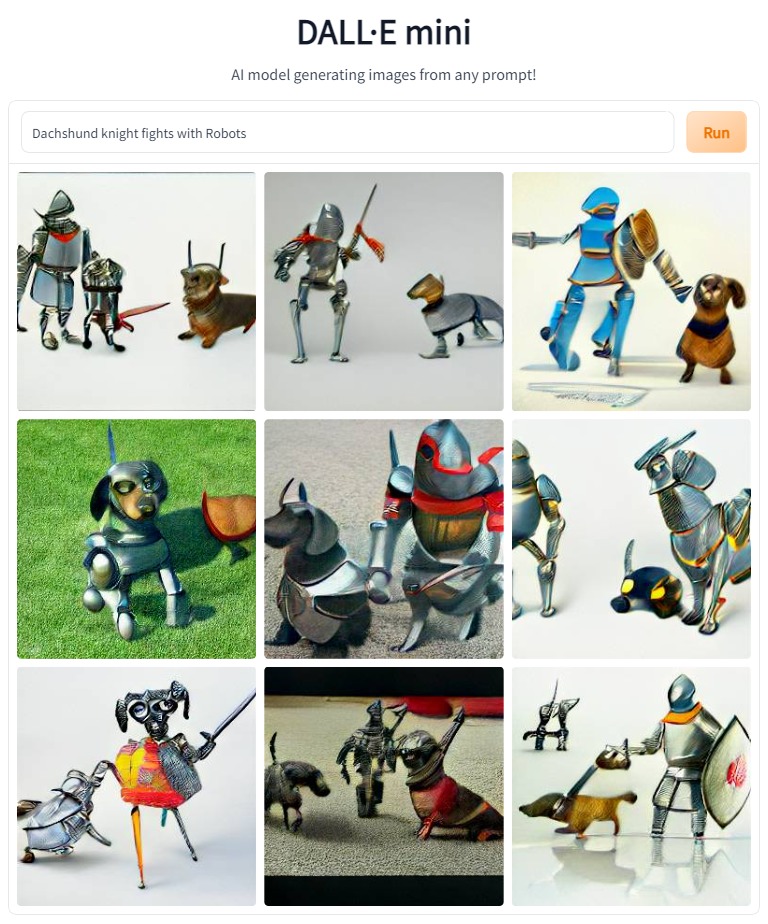 If anyone messes with combat robots, it’s a dachshund. 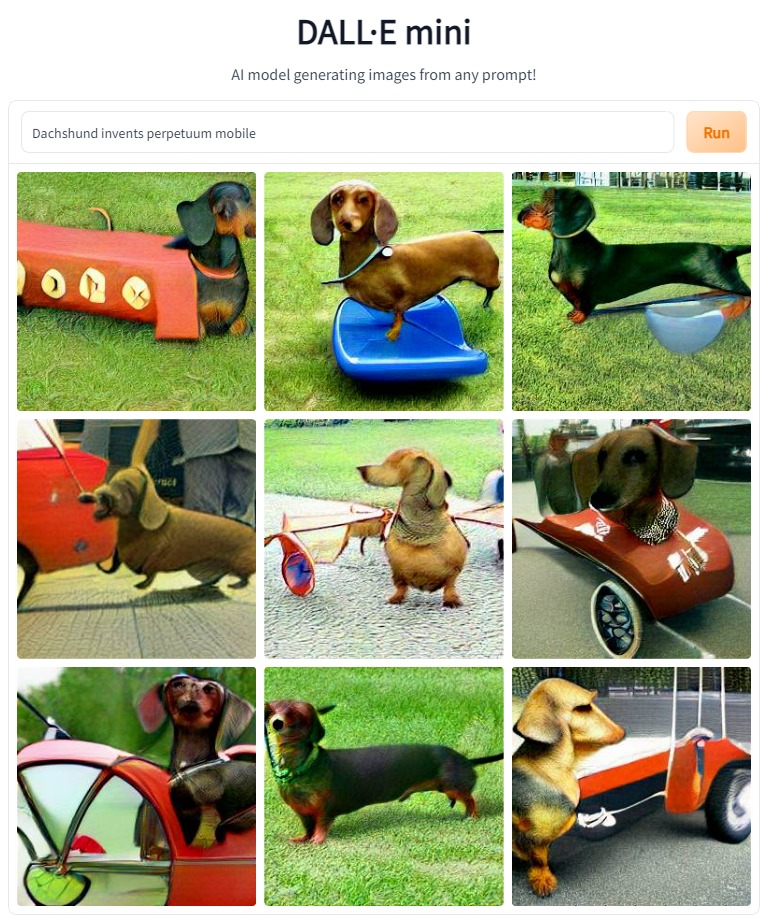 Dachshund invents perpetuum mobile – the software couldn’t imagine much of that. 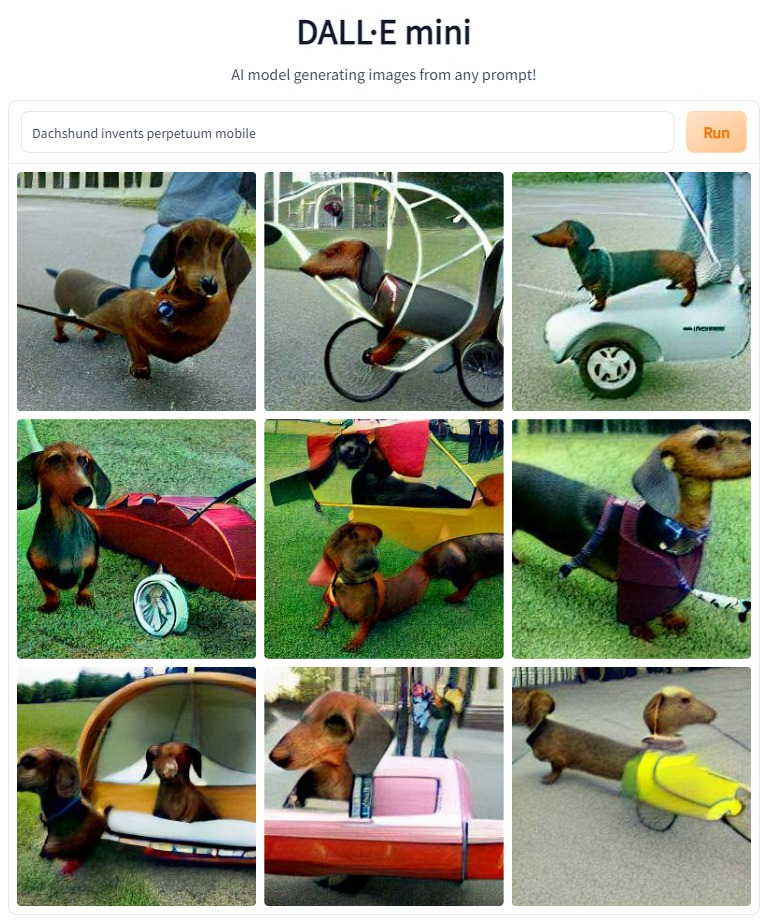 On the second try, the DALL-E mini created different images than the first time. 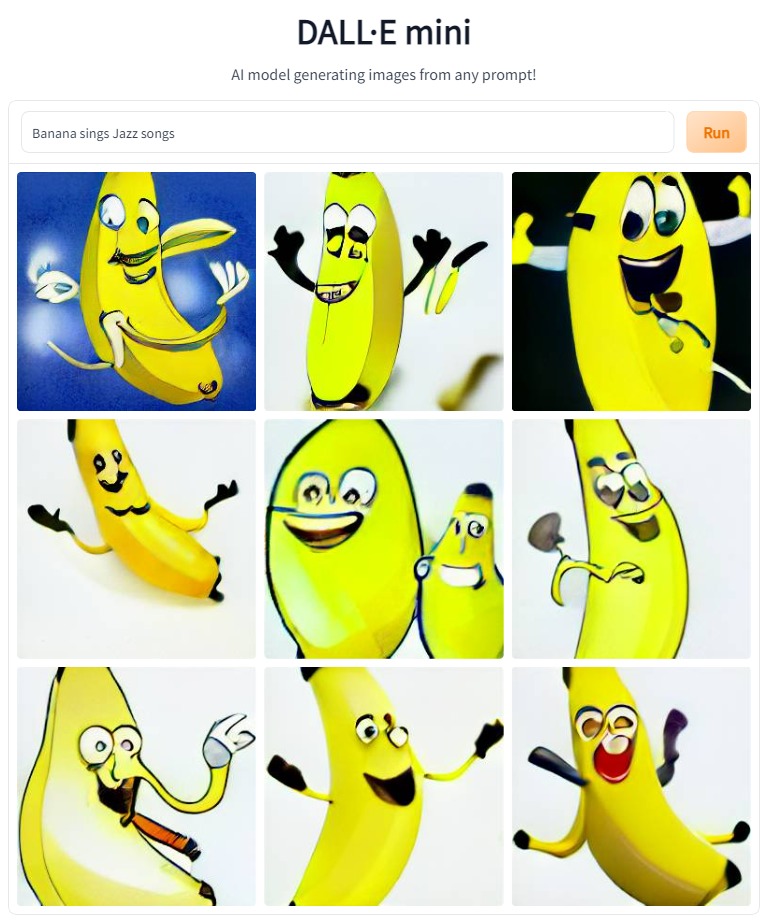 Yes, even a banana singing jazz songs is theoretically conceivable.

Sometimes it’s surprisingly amusing – and sometimes not at all. One thing is clear: The more image files there are for a term or phrase, the more interesting and accurate the result will be. What is striking: the AI ​​does not seem to get along so well with human faces. They often appear distorted, sometimes grotesque to the point of nightmare. Whereby this phenomenon can have a certain “artistic” charm.

DALL-E mini: Too much traffic – what can I do?

The image generator is based on OpenAI’s GPT-3 software and was created in 2021. But only now is DALL-E mini known to a broad mass – a very wide one, mind you. After thousands of user images went viral, more and more people wanted to try the tool, pushing the servers to the brink of resilience at times. Sometimes the program spits out the message “Too much traffic”. Then only one thing helps: wait and try again.

How humanities can advance AI research

Where does the name come from?

The name is a homage to the surrealist artist Salvador Dalí – indeed, the works often appear oddly dreamlike.

Yes, DALL-E mini can be used by everyone free of charge. The program is a kind of slimmed-down version of the DALL-E 2 software from OpenAI, which among other things can also generate photorealistic images from sentences – however, access to the software is only possible if you sign up on a waiting list: So far, only a few researchers have been allowed and artists DALL-E 2 test.

Bias and prejudice: AI’s morale is only as good as that of the users who feed it

An interesting aspect: On the platform there is a clear indication of the limitations of the software. It states: “While the capabilities of image generation models are impressive, they can also reinforce or exacerbate societal prejudice. While the magnitude and nature of DALL-E mini’s biases have yet to be fully documented, given that the model was trained with unfiltered data obtained from the Internet, it may produce images that contain anti-minority stereotypes.” That is: If images and their captions on the web serve certain prejudices or are subject to certain biases, then the AI ​​automatically takes them over – and in turn incorporates them into its images. DALL-E mini thus shows a fundamental problem of artificial intelligence: it is not inherently neutral or even good (or better than human instances).

Also listen to this issue of our podcast “Prototype” on the subject of AI:

When fed certain biases, it becomes difficult to untrain them. If you enter “engineer” in the search field, there is a high probability that you will only get pictures of men wearing helmets – no women. A phenomenon that coincides with reality insofar as women are still greatly underrepresented in most STEM professions. Which in turn is probably due to the fact that the profession is still considered more male in media and social thinking. Consequently, the DALL-e mini only produces images of female nurses when the keyword “nurse” is entered.

On the one hand, thought patterns that need to be overtaken become clear – but also the limits of AI. If a prejudiced machine is used, for example, in recruiting, in administration or even in the judiciary, this can have fatal consequences. “When it comes to the input data, i.e. the material with which an AI learns, it makes sense to approach this at least with a division of labour. The data is the starting point for such problems. A briefing for programmers on what data they are dealing with and how they should reflect on their own role is important. The complexity of modeling AI systems can also be better mapped across disciplines,” says Christoph Bieber. He has been a research professor for digital democratic innovations at the Center for Advanced Internet Studies in Bochum since October 2021.

Data Scientist: What does the professional data evaluator do?